If you comport yourself in a particular way, you behave in that way.

Someone who is indulgent tends to let other people have what they want; someone can be kind to excess when being indulgent.

Someone who is meritorious is worthy of receiving recognition or is praiseworthy because of what they have accomplished.

Someone who is thrifty is careful and cautious with how they spend money.

Someone who is unrestrained is free to do as they please; they are not controlled by anyone but themselves, which can lead to excessive behavior.

Two boys were charged with wanton and needless destruction of school property. Police, who said that the boys had no motive but acted simply out of boredom, described their groundless actions as wanton. This wanton disregard for public property upset most of the people in our small town, who were unused to acts of senseless and unprovoked vandalism.

Quiz: Try again! What is an example of a wanton act?

Wanton Wonton Soup Wonton soup hates me. Every time I get wonton soup at a restaurant it spills for no reason. This wanton wonton soup is very inconsiderate to my clothing and to my hungry stomach!

One who is “brought up” incorrectly becomes “lessened” in proper discipline or behavioral quality, and hence acts in wanton ways. 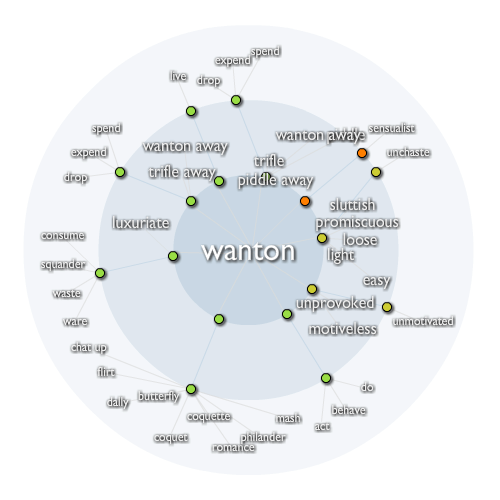