A state of anarchy occurs when there is no organization or order in a nation or country, especially when no effective government exists.

A cataclysm is a violent, sudden event that causes great change and/or harm.

A chaotic state of affairs is in a state of confusion and complete disorder.

Consternation is the feeling of anxiety or fear, sometimes paralyzing in its effect, and often caused by something unexpected that has happened.

A mellifluous voice or piece of music is gentle and pleasant to listen to.

A muted sound is quiet or purposely softened in some way.

If you are in a state of repose, your mind is at peace or your body is at rest.

Someone who is vociferous expresses their opinions loudly and strongly because they want their views to be heard.

A vortex is a force, such as a tornado or whirlpool, that draws things to its center and overwhelms anything caught within it.

When I attended the Rolling Stones concert, there was tumultuous applause even at the beginning of the show that drowned out the strains of the first song. The tumultuous music itself mirrored the wild and noisy rock and roll genre that drove fans crazy with excitement. Once the concert ended, the crowd broke into such a tumultuous and hugely happy uproar that Mick Jagger and company came back onstage for three encores.

Quiz: Try again! How would you describe a tumultuous relationship?

Ultimate Tumble The buffalo, in the wild confusion of their tumultuous stampede, all rushed off the cliff, taking the ultimate tumble to their deaths.

A tumultuous crowd is “swelling” with noise, causing a great “disturbance,” including an “uproar” and perhaps even a “riot.” 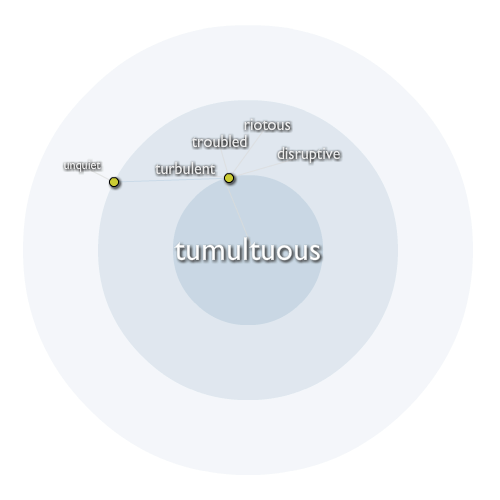