If you abase yourself, people respect you less because you behave in a way that shows that someone else has complete power over you.

An acolyte is someone who serves a leader as a devoted assistant or believes in the leader’s ideas.

Blandishments are words or actions that are pleasant and complimentary, intended to persuade someone to do something via a use of flattery.

An entourage is a group of assistants, servants, and other people who tag along with an important person.

If someone is implacable, they very stubbornly react to situations or the opinions of others because of strong feelings that make them unwilling to change their mind.

When you kowtow to another person, you flatter her excessively or act in a very submissive way to please her.

A lackey is a person who follows their superior’s orders so completely that they never openly question those commands.

A laudatory article or speech expresses praise or admiration for someone or something.

A minion is an unimportant person who merely obeys the orders of someone else; they usually perform boring tasks that require little skill.

If someone is being obsequious, they are trying so hard to please someone that they lack sincerity in their actions towards that person.

Something that is specious seems to be good, sound, or correct but is actually wrong or fake.

If you are supine, you are lying on your back with your face upward.

In the Middle Ages, a vassal was a worker who served a lord in exchange for land to live upon; today you are a vassal if you serve another and are largely controlled by them.

The seemingly harmless public official was clearly a self-serving sycophant who flattered superiors to obtain favors. This lying sycophant or puppet spoke empty praises to anyone who would hear him for the purpose of making those people think well of him so he, in turn, could gain power. This sycophant used such an excessive array of false compliments that he at long last wormed his way into a leadership position.

Quiz: Try again! What is a sycophant?

Syco Pant Man "Man, you're a sicko! You ask the boss what pants he wants you to wear? You're such a sick sycophant!"

A sycophant is a “shower of figs;” one possible explanation of this word is that sycophants would inform authorities about crooks who were illegally exporting “figs” from Athens. 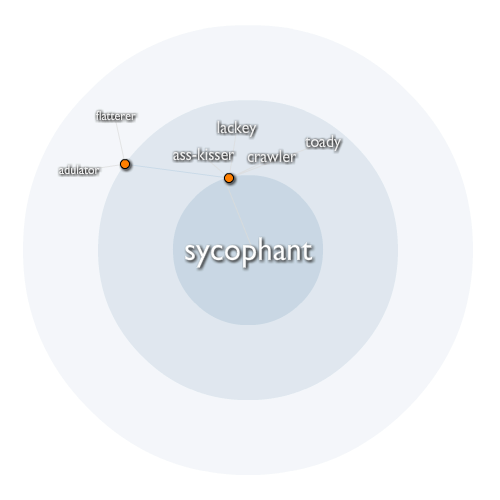