An abortive attempt or action is cut short before it is finished; hence, it is unsuccessful.

When you abscond, you leave suddenly from a place that has imprisoned or persecuted you, or you leave from a place with something that doesn’t belong to you.

When you employ artifice, you use clever tricks and cunning to deceive someone.

A canard is a piece of news or information that is false; it is deliberately spread either to harm someone or as a hoax.

If you collude with people, you work secretly with them to do something dishonest.

Complicity is the involvement in or knowledge of a situation that is illegal or bad.

If one person connives with another, they secretly plan to achieve something of mutual benefit, usually a thing that is illegal or immoral.

When you are being evasive, you are trying to avoid trouble or not give a direct answer to a question.

If you exude a quality or feeling, people easily notice that you have a large quantity of it because it flows from you; if a smell or liquid exudes from something, it flows steadily and slowly from it.

A facade is a false outward appearance or way of behaving that hides what someone or something is really like.

A feint is the act of pretending to make a movement in one direction while actually moving in the other, especially to trick an opponent; a feint can also be a deceptive act meant to turn attention away from one’s true purpose.

If someone exhibits finesse in something, they do it with great skill and care; this most often refers to handling difficult situations that might easily offend people.

A gambit is something that you say or do in order to gain an advantage in a given situation or game.

Something that is latent, such as an undiscovered talent or undiagnosed disease, exists but is not active or has not developed at the moment—it may develop or become active in the future.

A machination is a secretive plan or clever plot that is carefully designed to control events or people.

A mountebank is a smooth-talking, dishonest person who tricks and cheats people.

Something that is ostensible appears to be true or is officially declared to be true but is really a cover for the actual truth of a situation.

If a mood or feeling is palpable, it is so strong and intense that it is easily noticed and is almost able to be physically felt.

A semblance is an outward appearance of what is wanted or expected but is not exactly as hoped for.

Sophistry is the clever use of arguments that seem correct but are in fact unsound and misleading, used with the intent to deceive people.

Something that is tangible is able to be touched and thus is considered real.

Diana always got her way, even if she had to use subterfuge or underhanded trickery to get it. She appeared to be kind, but underneath her golden surface lurked the mastermind of a clever manipulator gifted in schemes, deception, and subterfuge. She would often use subterfuge or secret plots that were highly successful in getting others to do what she wanted.

Quiz: Try again! What is subterfuge?

Subplot? Huge Turf! My neighbor's subterfuge to annoy me was to employ a subplot of pretending to learn how to golf and sending huge clumps of turf sailing over my fence!

Subterfuge is a “fleeing under” another’s eyes and mind in order to trick or deceive him “from below.” 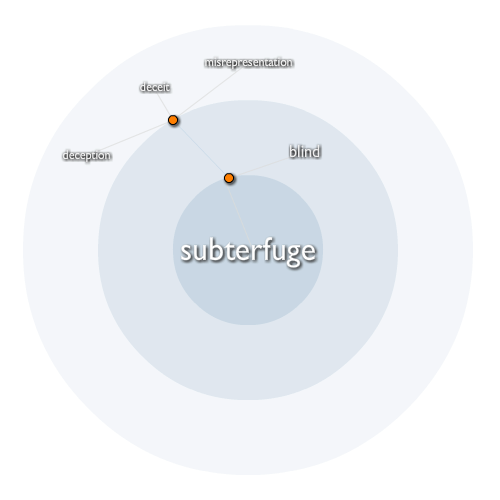