If you discern something, especially something that is not obvious, you notice, detect, or perceive it, especially after thinking about it carefully or studying it.

An injury that is excruciating is extremely painful.

An industrious student puts a lot of energy and devotion into the hard work that he does.

If you are methodical in doing something, you move along in a very logical, orderly, and systematic way until it is accomplished.

A negligent person does not complete what they say they will do—they are careless or inattentive to their work.

A slovenly person is untidy or messy.

A tepid reaction to something is mild, unemotional, and lacking in enthusiasm; tepid water is likewise lukewarm—not too hot and not too cold.

The perfunctory performance of the band members left us feeling less than enthusiastic as they seemed to be uninterested in what they were doing. The lead singer didn’t even look out into the crowd as he perfunctorily went through what appeared to be a tired old routine. The band went through the motions in a perfunctory, unthinking manner, like they were unconcerned about both their music and the audience. The band broke up after this perfunctory and wooden performance, citing boredom as the main cause.

Quiz: Try again! What is a perfunctory act?

Percy's Fun Factory Percy's fun factory used to be a lot of fun, but now that we've gone through Percy's fun factory 500 times, our enjoyment is nothing but perfunctory, despite the fact that Percy is our father and he gives us extra cotton candy each time we go through.

To perform a task in a perfunctory fashion is to “thoroughly perform or complete” it in the sense of getting it over with as quickly as possible. 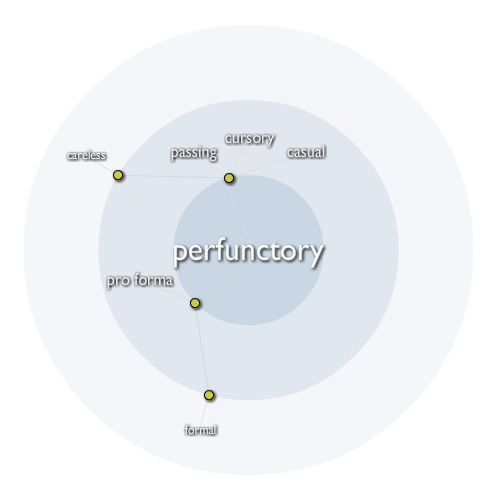