When you claim that something is banal, you do not like it because you think it is ordinary, dull, commonplace, and boring.

A curio is an object that is very old or unusual; thus, it is viewed as interesting.

A distinctive trait of someone sets them apart from everyone else; it is what makes them different or unique.

Something insipid is dull, boring, and has no interesting features; for example, insipid food has no taste or little flavor.

A monotonous activity is so repetitious that it quickly becomes boring and dull.

An ornate object is heavily or excessively decorated with complicated shapes and patterns.

Something that is plebeian is common, ordinary, and unsophisticated.

Something that has a singular nature is either exceptional and remarkable or unusual and odd, both cases of which point it to being unique in some way.

Something uncanny is very strange, unnatural, or highly unusual.

Something vapid is dull, boring, and/or tiresome.

Something that is vintage is first-rate and of excellent quality; it is often of a past time and is a classic representative of its kind.

My brother has decided to become a banker, which seems to me like a boring, unimaginative, and pedestrian career. He has always been artistic, so I imagined his becoming a painter or a sculptor, rather than working a pedestrian, nine-to-five, everyday job. I think he wanted the financial security that is more easily attained through pedestrian, commonplace, run-of-the-mill work.

Quiz: Try again! When is something considered pedestrian?

The adjective pedestrian refers to the place where everyone is “on foot,” that is, the common place where people or pedestrians usually walk; hence, the heavily-used path would be the pedestrian, or ordinary, one. 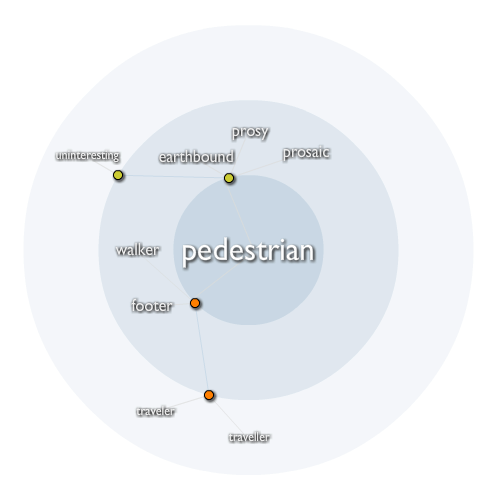