An anthology is a book that contains a collection of a particular writer’s best works; it can also be a gathering of similar writings, such as short stories or poetry, by different authors.

A compendium is a detailed collection of information on a particular or specific subject, usually in a book.

If you concatenate two or more things, you join them together by linking them one after the other.

A corpus is a body of some sort, such as a collection, especially a body of writings by either type or author.

A farrago is a confused collection or mixture of different types of things.

The juxtaposition of two objects is the act of positioning them side by side so that the differences between them are more readily visible.

A medley is a collection of various things, such as different tunes in a song or different types of food in a meal.

A melange is a collection of different kinds of things.

A collection of things is motley if its parts are so different that they do not seem to belong in the same space; groups of widely variegated people can also be described as motley.

A pastiche is a piece of writing, music, or film, etc. that is deliberately made in the style of other works; it can also use a variety of such copied material in order to laugh in a gentle way at those works.

Sundry people or things are all different from each other and cannot form a single group; nevertheless, they can be thought of as being together for the sake of ease, such as the various items in a garage.

When you are presented with a synoptic view of a written work or subject, you receive a summary or general overview of the entirety of its contents.

If someone is unlettered, they are illiterate, unable to read and write.

Our teacher assigned us an omnibus, or collection of Faulkner’s short fiction that we could not finish. The vast omnibus of his writings included all of his novels. Dr. Emily Rose wanted us to read the entire anthology, but no one had time to complete all the pages of such a long omnibus. A second Faulkner omnibus contained hundreds of his letters, which we also could not complete.

Quiz: Try again! What is an omnibus?

An omnibus was originally a long vehicle used as transportation “for all,” which was later shortened to just “bus.” Just as many people can be brought together on an omnibus, so too can many works be brought together into a single volume, or omnibus. 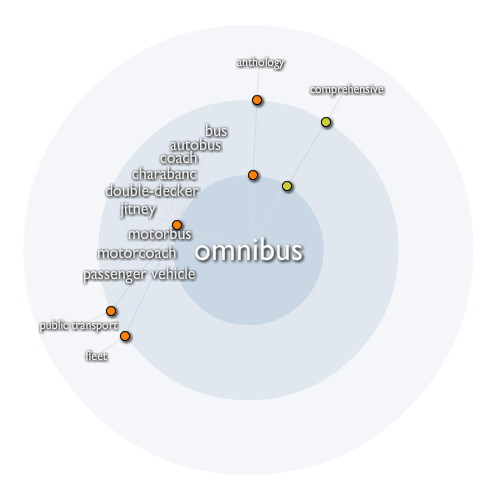