When you are under another person’s auspices, you are being guided and protected by them.

A bastion is considered an important and effective defense of a way of life or principle; a bastion can also refer to a heavily fortified place, such as a castle.

When you compromise someone’s safety or reputation, you put it in danger in some way.

A contagion is a disease—or the transmission of that disease—that is easily spread from one person to another through touch or the air.

Something that is deleterious has a harmful effect.

Something detrimental causes damage, harm, or loss to someone or something.

A dilemma is a difficult situation or problem that consists of a choice between two equally disagreeable or unfavorable alternatives.

When someone is exonerated from guilt, a task, or a responsibility, they are set free or excused from it.

A fortification is a structure or building that is used in defense against an invading army.

An imbroglio is a very difficult, confusing, and complicated situation.

An impasse is a difficult situation in which progress is not possible, usually because none of the people involved are willing to agree.

If you are impervious to things, such as someone’s actions or words, you are not affected by them or do not notice them.

An impregnable opinion or feeling is very difficult to change.

When a spy infiltrates enemy lines, they creep in or penetrate them so as to gather information.

Something that is insidious is dangerous because it seems harmless or not important; nevertheless, over time it gradually develops the capacity to cause harm and damage.

An internecine conflict or quarrel takes place between people who belong to the same group, organization, country, etc.

If you are inured to something unpleasant you have become so used to it that it no longer affects you.

Someone or something that is invulnerable cannot be harmed in any way; hence, they or it is completely safe or secure.

A leviathan is something that is very large, powerful, difficult to control, and rather frightening.

A miasma is a harmful influence or evil feeling that seems to surround a person or place.

Something that is noxious is harmful, extremely unpleasant, and often poisonous.

To obviate a problem is to eliminate it or do something that makes solving the problem unnecessary.

A pathogen is an organism, such as a bacterium or virus, that causes disease.

A perilous situation is highly dangerous or extremely risky.

Something that is pernicious is very harmful or evil, often in a way that is hidden or not quickly noticed.

If you are in a plight, you are in trouble of some kind or in a state of unfortunate circumstances.

A precarious situation or state can very quickly become dangerous without warning.

A quagmire is a difficult and complicated situation that is not easy to avoid or get out of.

Something sinister makes you feel that an evil, bad, or harmful thing is about to happen.

Severe problems, suffering, or difficulties experienced in a particular situation are all examples of tribulations.

We were in real jeopardy or danger when the elephant in the wildlife sanctuary came charging towards our car. We couldn’t believe that the bull elephant was so mad, and that we were in this situation of great jeopardy or threat. Fortunately, throwing our bag of peanuts out the window saved us from being knocked over and trampled, and thus we saved ourselves from great jeopardy or personal hazard.

Quiz: Try again! What is an example of someone who is in jeopardy?

Jeopardy! The Game Jeopardy is a game show where your accumulated money is put into jeopardy when you answer questions.

School of Rock Putting Ned's career in jeopardy was a bad idea. 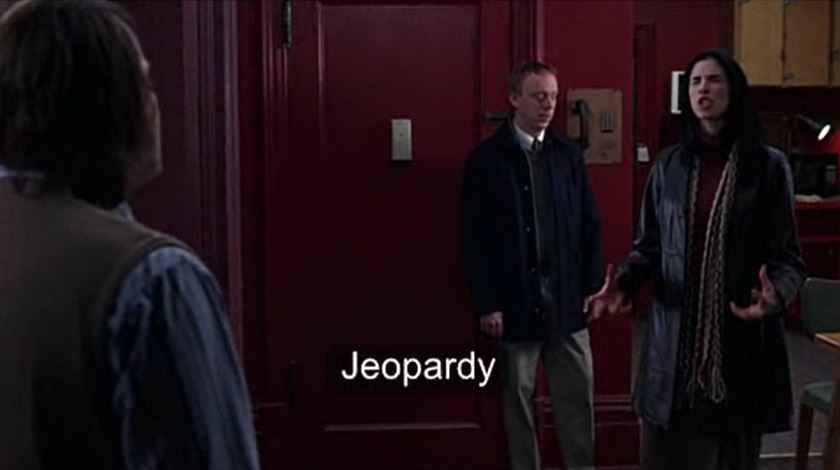 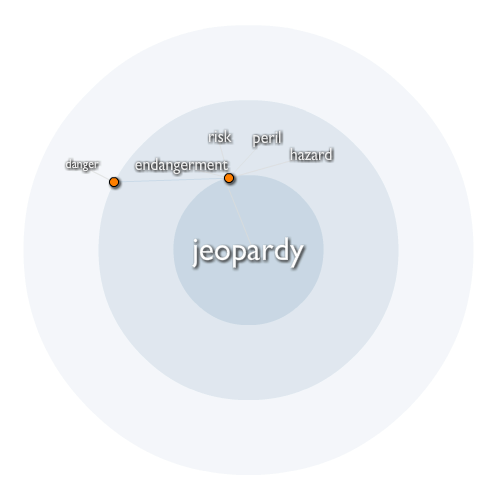