Someone who is abstemious avoids doing too much of something enjoyable, such as eating or drinking; rather, they consume in a moderate fashion.

Abstinence is the practice of keeping away from or avoiding something you enjoy—such as the physical pleasures of excessive food and drink—usually for health or religious reasons.

When you are acquisitive, you are driven to pursue and own wealth and possessions—often in a greedy fashion.

You allay someone’s fear or concern by making them feel less afraid or worried.

An ascetic denies himself the pleasures of life in an extreme way, being exceedingly strict with himself.

When you assuage an unpleasant feeling, you make it less painful or severe, thereby calming it.

Avarice is the extremely strong desire to have a lot of money and possessions.

If you covet something that someone else has, you have a strong desire to have it for yourself.

A deluge is a sudden, heavy downfall of rain; it can also be a large number of things, such as papers or e-mails, that someone gets all at the same time, making them very difficult to handle.

An exigent situation is urgent and demands a lot of attention, often in ways that are expensive in time, cost, and effort.

Someone who is frugal spends very little money—and even then only on things that are absolutely necessary.

If you describe someone as importunate, you think that he is annoying and unreasonable because he keeps trying to get something from you.

A parsimonious person is not willing to give or spend money.

If you describe a person’s behavior as rapacious, you disapprove of them because they always want more money, goods, or possessions than they really need.

If you are ravenous, you are extremely hungry.

If something, such as food or drink, satiates you, it satisfies your need or desire so completely that you often feel that you have had too much.

When you slake your thirst you relieve or satisfy it by drinking enough fluid.

If you have a surfeit of something, you have much more than what you need.

A teetotaler is one who does not drink alcohol.

An unquenchable desire or thirst cannot be satisfied or gotten rid of.

A voracious person has a strong desire to want a lot of something, especially food.

Katie woke up from her nap with her usual insatiable or endless need for chocolate. She rushed to the kitchen and began to gobble a rich cake insatiably and insistently, gulping down huge pieces and licking every last bit of frosting from her fingers. Katie’s unsatisfied, demanding, and insatiable appetite led her to then dig into the chocolate ice cream with chocolate sauce.

Quiz: Try again! What is an insatiable appetite or desire?

Not Able To Be Satisfied An insatiable thirst for knowledge is not able to be satisfied--one must have more and more in a never-ending stream.

An insatiable need for affection means that you are “not capable of having enough.” 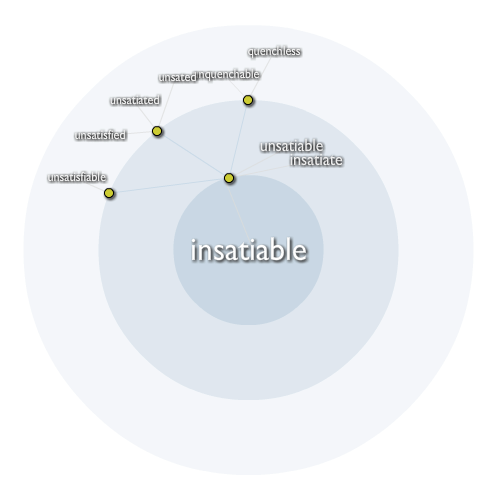