Effrontery is very rude behavior that shows a great lack of respect and is often insulting.

Hauteur is the spirit of someone who is proud, unfriendly, and arrogant.

Someone who is imperious behaves in a proud, overbearing, and highly confident manner that shows they expect to be obeyed without question.

If someone behaves in an impertinent way, they behave rudely and disrespectfully.

If someone demonstrates impudence, they behave in a very rude or disrespectful way.

To act with temerity is to act in a carelessly and irresponsibly bold way.

Greek drama often tells the story of a man brought down by his own hubris, illustrating the idea that excessive pride comes before a fall. The authors tell us that it is human nature not to recognize one’s own hubris or flawed, enormous pride. The more power one acquires the more likely one is to fall into hubris or blind self-importance.

Quiz: Try again! What is hubris?

Hub Rising "Hey everyone, do you see my cool new hubcaps? Man, these hubcaps so rock, and they are brighter than the sun rising. Because I have such awesome hubcaps, man, I'm too cool for all of you." And in such a way did Boastful Bob's hubris cost him his gorgeous wife because she was sick and tired of him bragging about his stupid hubcaps that were supposedly brighter than the rising sun.

From a root word meaning “wanton violence, outrage, insolence.” If one demonstrates hubris, one’s excessive self-importance is a form of “insolence” or “outrage” upon acceptable behavior and social norms. 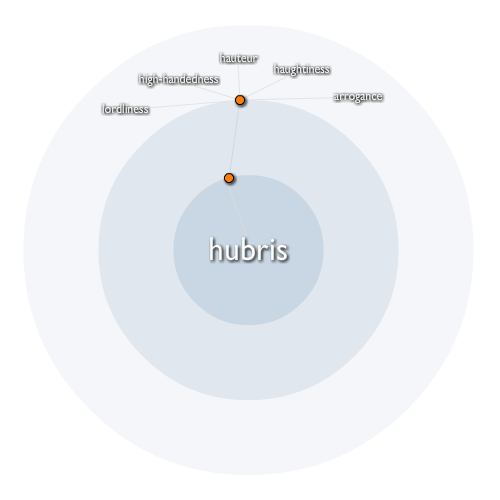