If you abhor something, you dislike it very much, usually because you think it’s immoral.

To accentuate something is to emphasize it or make it more noticeable.

When you are captivated by someone or something, you are enchanted, fascinated, or delighted by them or it.

A person who is comely is attractive; this adjective is usually used with females, but not always.

Desiderata are a wish list of things that are considered highly desirable or necessary to have.

Something macabre is so gruesome or frightening that it causes great horror in those who see it.

Animals preen when they smooth out their fur or their feathers; humans preen by making themselves beautiful in front of a mirror.

When you possess pulchritude, you are beautiful.

Repugnance is a strong feeling of dislike for something or someone you find horrible and offensive.

Something that is repulsive is offensive, highly unpleasant, or just plain disgusting.

If something is reviled, it is intensely hated and criticized.

When you experience revulsion, you feel a great deal of disgust or extreme dislike for something.

Something that is tantalizing is desirable and exciting; nevertheless, it may be out of reach, perhaps due to being too expensive.

Something is toothsome when it is tasty, attractive, or pleasing in some way; this adjective can apply to food, people, or objects.

If you describe something as unsavory, you mean that it is unpleasant or morally unacceptable.

Someone who is unsightly presents an ugly, unattractive, or disagreeable face to the world.

Someone who is winsome is attractive and charming.

The grotesque figure of the zombie was so distorted in appearance that it was highly disturbing. Its bizarre face and grotesque build were so scary to look at, and it really grossed me out. I prefer lighter movies that feature pleasant characters, not these horror films that feature grotesque or extremely ugly characters meant to shock and creep you out.

Quiz: Try again! What does someone look like if he is grotesque?

Grotesque Something grotesque is just gross.

Grotesque ultimately comes from a root word meaning “grotto,” a cave or cavern (natural or artificially constructed) “hidden” away. Pictures found in excavated Roman buildings had elements of the grotesque in them, that is, they were somewhat “bizarre” or “outlandish,” and hence were appropriately “resembling” that which should be “hidden” away, and so were. Note: the letters “k” and “g” are often interchangeable across languages.

Rick and Morty The monster is grotesque. 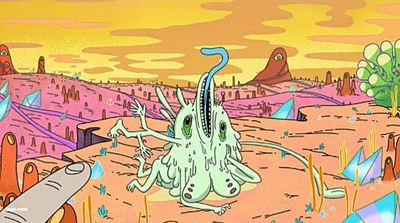