Approbation is official praise or approval of something.

When you castigate someone, you criticize or punish them severely.

To decry something is to speak against it and find fault with it.

If you denigrate something, you criticize or speak ill of it in a way that shows you think it has little to no value at all.

If you disparage someone or something, you say unpleasant words that show you have no respect for that person or thing.

An elegy is a poem or other piece of writing expressing sadness; it is often about someone who has died.

An encomium strongly praises someone or something via oral or written communication.

If you exhort someone to do something, you try very hard to persuade them to do it.

If you expostulate with someone, you express strong disagreement with or disapproval of what that person is doing.

If you extol something or someone, you praise it or them very enthusiastically.

If you fulminate against someone, you speak or write angrily and with heavy criticism about them.

A harangue is a long, scolding speech.

If you inveigh against something, you criticize it very strongly.

A laudatory article or speech expresses praise or admiration for someone or something.

A paean is a piece of writing, verbal expression, or song that expresses enthusiastic praise, admiration, or joy.

A panegyric is a speech or article that praises someone or something a lot.

A peroration is a long speech that sounds impressive but does not have much substance.

A tirade is a prolonged, verbal outburst that severely criticizes someone or something.

If you vilify people, you write or say bad things about them in an attempt to make them unpopular.

Geraldine believed that it was her civic duty to protest some new construction, so she wrote a diatribe in her long and angry letter to the editor of the local paper. Her strong disapproval of the land development caught everyone’s attention—such a fierce diatribe or written criticism surprised even the editor himself. Geraldine’s furious letter of protest or diatribe against excessive development influenced many other locals in the area, who filed complaints as well.

Quiz: Try again! What is a diatribe?

Dial a Tribe If you don't like a particular tribe, you could dial that tribe and speak a diatribe against it, all from the convenience of your own home!

To level a diatribe against another person is to “thoroughly rub or pound” them with angry words, trying to drive home the point that you are very displeased. 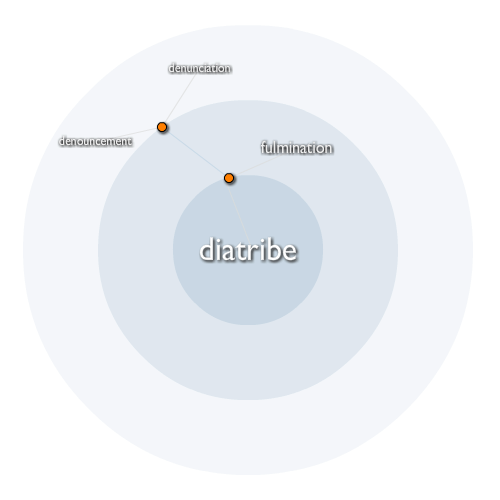