The adjective auspicious describes a positive beginning of something, such as a new business, or a certain time that looks to have a good chance of success or prosperity.

A dulcet sound is soft and pleasant in a gentle way.

If someone demonstrates impudence, they behave in a very rude or disrespectful way.

If someone has a jaundiced view of something, they ignore the good parts and can only see the bad aspects of it.

Someone who acts in an ornery way is mean, cranky, or highly irritable.

A petulant person behaves in an unreasonable and childish way, especially because they cannot get their own way or what they want.

Something rancid is way past fresh; in fact, it is decomposing quickly and has a bad taste or smell.

Rancor is a feeling of bitter ill will or intense dislike towards another person.

Repugnance is a strong feeling of dislike for something or someone you find horrible and offensive.

If you are sedate, you are calm, unhurried, and unlikely to be disturbed by anything.

When you take umbrage, you take offense at what another has done.

Bilious Billy not only had terribly bad breath and body odor, but also possessed a rather unpleasant personality. Many co-workers had attempted to tell Billy politely about this bilious and disgusting physical problem, but he would not listen since he was so irritable. As a result of his bilious, unhealthy presence and his disagreeable behavior, he soon lost the few friends he did have.

Quiz: Try again! When someone is acting in a bilious fashion, they are

Billy Club! When the bilious policeman took out his billy club, we weren't going to wait around to see his temper really flare into bullying us!

Medieval medicine taught that the body possessed four fluids or humors: black bile, yellow bile (choler), blood, and phlegm; the relative concentrations of these four humors, different for each person, determined mood, health, and general disposition. An excess of choler, or “yellow bile,” made one angry or irritable. 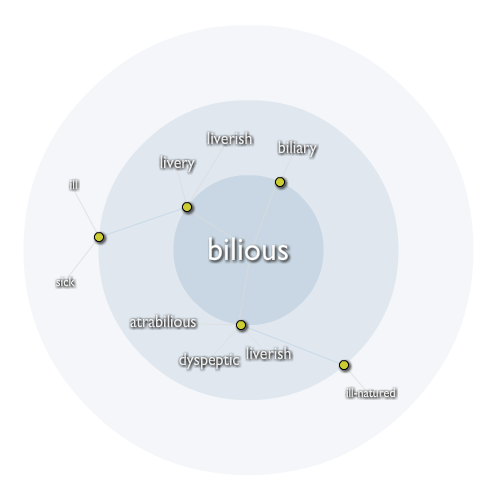