An erstwhile friend is a friend no longer.

A matriarch is an older and powerful woman who controls a family, community, or other social group.

Something that is outmoded is no longer in fashion or is out-of-date in some way.

A patriarch is a male leader of a family or tribe; a patriarch can also be a man who is the founder of a group or organization.

Something primeval is ancient or belonging to the original development of something.

The adjective primordial is used to describe things that existed close to the formation of Earth or close to the origin or development of something.

If something, such as clothing, is in vogue, it is currently in fashion or is one of the hottest new trends; hence, it is very popular.

Maximilian felt that he should have been born in another century because he felt so attracted to very old-fashioned, antediluvian beliefs. He maintained an antediluvian practice of wearing a stiffly starched collar, pocket watch, and a nineteenth-century pinstripe Victorian suit. Marjory thought that Max’s outdated habits were charming in an Old World sort of way, but she disagreed with his antediluvian beliefs about women’s place in society, which were anything but up-to-date. Over time, Max changed some of his antediluvian views to more modern ones so that the feminist Marjory would marry him.

Ann + Ted = Luv It's carved on that old tree, but that antediluvian carving is so outdated that Ann has had six other boyfriends since Ted.

A flood “thoroughly washes” the land. The idea here is that something antediluvian is so old that it happened before the Biblical Flood. 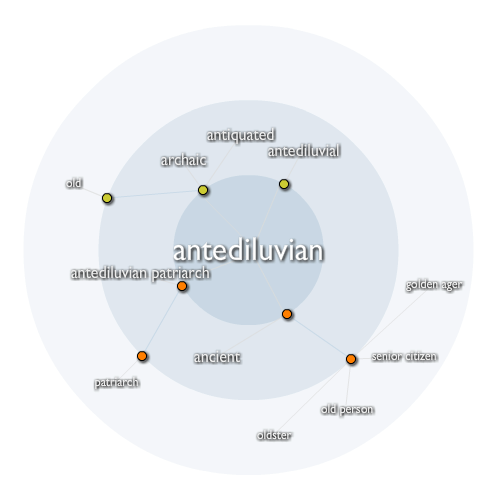